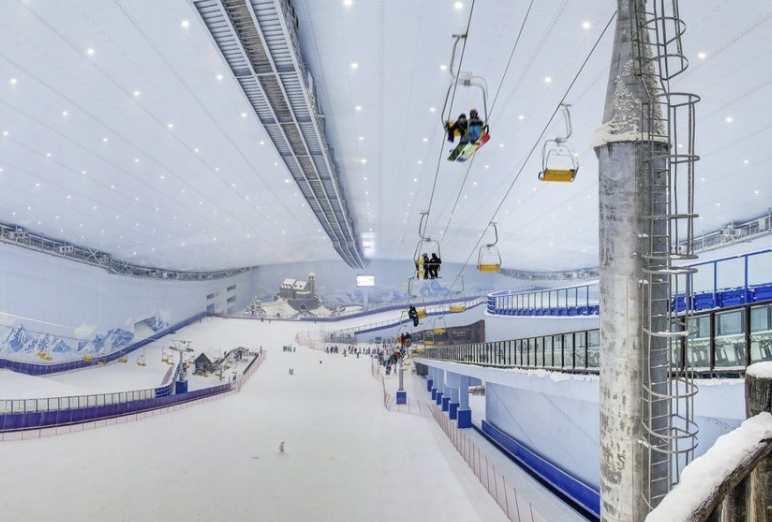 You are passionate about skiing, but not always able to do it. The following ski resorts will help you make your dreams come true at any time.

Throughout its nearly 100-year history, indoor ski resorts have consistently set records. You can still ski without mountains! Snow Palace in Berlin, Germany is the first indoor ski area in the world, opened in April 1927. In November of that year, another ski resort was opened in Vienna, Austria. Artificial snow is said to have a soda flavor.

In the 1930s, indoor skiing caused a fever, with small ski resorts sprouting up in England and France. Not to be outdone, Saks Fifth Avenue also opened an indoor ski resort in New York, and also included a service to guide visitors to ski lessons.

Sverre Kolterud athlete is showing his flight in the air while participating in indoor skiing at Earl’s Court, London, England in 1938.

Indoor ski resorts have begun to spring up in Japan since 1960. Images of boys happily challenged on a 300-meter-long slope at Tokorozawa City’s Sayama Indoor Ski Area in 1960. The present area This ski is still open to this day.

In the 80s-90s of the 20th century, Japan continued to build the world’s largest indoor ski area in Tokyo (photo was taken in 1996) including the artificial snow sky. SSAWS in Funabashi City was the largest complex in the world at the time of inauguration (1993) with a cost of up to 400 million USD.

In the 1990s, Canadian inventor Jim Rodnunsky invented the “Ski and Snowboard Simulator”, an automatic snowboard that can arbitrarily slope and angle. This skid machine later becomes a very effective ski training tool.

Snowman Jesse Augustinus shot in September 2017 in the SnowWorld Landgraaf ski resort in the Netherlands. This is considered the largest indoor ski resort in Europe, opened in 2002, with 5 slopes and 8 lifts.