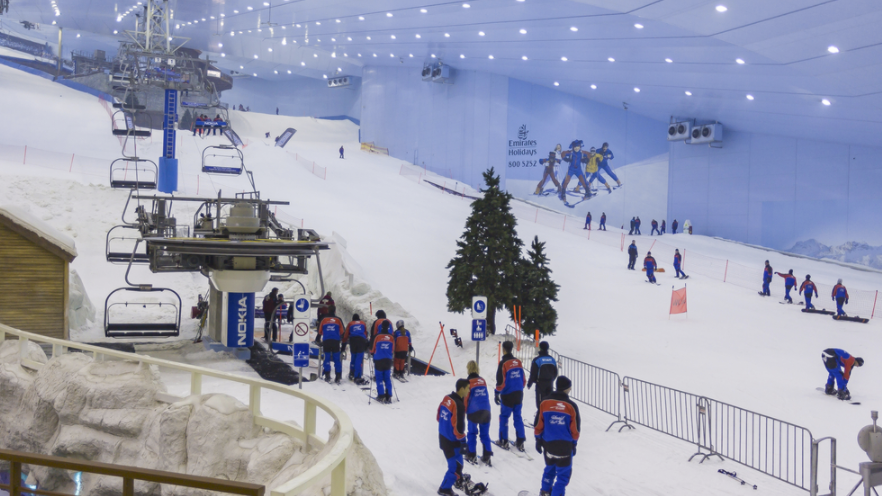 Amneville Snowhall opened in France in 2005, which has hosted indoor skiing championships in France and Europe. During the heat wave in 2016, temperatures below 0 degrees became the ideal hot spot, even for those who did not come here to ski.

The Harbin Wanda Indoor Ski and Winter Sports Resort in northeastern China became the world’s largest indoor ski park when it opened in 2017. China is trying to build massive winter sports complexes for preparing for the 2022 Beijing Winter Olympics.

Ski Dubai also opened in 2005, at Mall of the Emirates. When opened, the site became the first indoor ski center in the Middle East and the largest in the world.

Dubai (UAE) also has a ski area about to open in the Meydan One Mall project, with an investment of billions of dollars and will be completed in 2020. The design shows this ski area department right slope 1.2 km long, the longest in the world.

The US hasn’t had many outdoor and indoor ski resorts over the years, but that’s about to change. Big SNOW America is an indoor ski park that is under construction to 16,722 square meters and will open in March 2019.

It is not long before Wintastar Shanghai, China becomes one of the world’s largest indoor ski resorts and resorts, consisting of 3 artificial slopes with a total area of ​​227,000 square meters and is expected to open to visitors. calendar in 2022, just in time for the 2022 Winter Olympics to take place in Beijing.