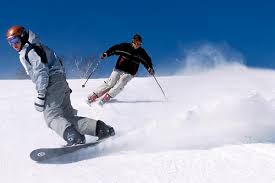 Skiing and snowboarding are recreational sports refers to the ways of moving over snow with boards attached to the feet. Although both sports offer great fun, they are fundamentally different in terms of practise.

Skiing is uses a pair of skiing boots to travel over snow with one foot progressing at a time while snowboarding involves traveling on snow with a single snowboard attached to boots which is inspired by surfing, skiing and skateboarding.

Skiing was invented by prehistoric people as means of transportation and for hunting before being upgraded into a form of recreation by Sondre Norheim. He is responsible for the creation of skiing templates and all modern versions of skiing such as telemark skiing which was common in 19th century. New technique such as the snow plow or stem technique has made snow slopes friendlier to beginners while the Arlberg technique has made skiing to become a popular recreational activity.

The snowboard is believed to have been developed in 1970s in Utah with the first snowboard called the Snurfer was designed by Sherman Poppen for his daughter in 1965. The Snurfer became a popular toy from the following year which lead to the popularity of snowboarding as a recreational sport. Dimitri Milovich then redesigned the snowboard and started his own company called WinterStick manufacturing the board. Jake Burton Carpenter, Tom Sims, Chuck Barfoot and Mike Olson are the ones responsible for the snowboards and mechanisms that is currently in used today.

Skiing uses poles to assist skiers moving downhill or uphill and support them when they are in an upright position. Meanwhile, snowboard riders need to frequently seat and exert more energy to remain on edge when they come to a stop. Although a snowboarder and a skier hold the same kind of expertise with respect to sheer velocity, skiing gains an upper hand over snowboarding as being faster.