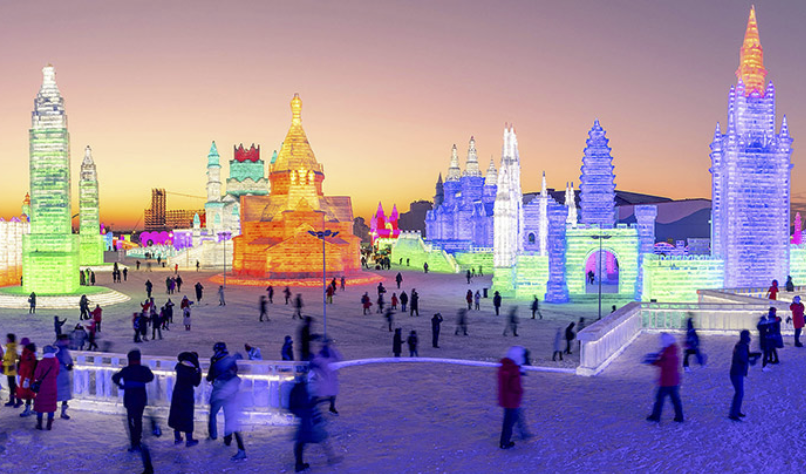 The 80,000-square-meter Ice and Snow Park is the world’s largest indoor ski resort, in response to China’s ambitions of winter sports powerhouse.

A hot summer afternoon in Harbin city. Visitors hold the famous local milk ice cream sticks through the cobblestone streets. But in the world’s largest ski park located here, the weather is ideal for a sloping adventure, AFP reported on September 18.

Snowflakes follow cold winds around players on the artificial slopes at C where Ice and Snow are just opening this summer. It is a new symbol of China’s ambition to become the powerhouse of winter sports before the 2022 Beijing Winter Olympics.

The fan and underground cooling system keep the temperature in this  80,000 m2 area at -5 degrees C. The park has 6 slides, the longest road is 500 meters long. Kane is a practitioner at a private ski academy in Beijing.

Like many other students, he hopes to one day compete in the Olympics. Kane and his teammates spent many summers training in New Zealand. The new facility of the Dalian Wanda Group allows you to practice near your home.

Players in Ice and Snow Park in Harbin

Not long ago, skiing was still considered a luxury sport not for the masses in China. But the country currently has about 6 million skiers and is expected to have 300 million in the coming years.

China has had great success at the Summer Olympics. But the number of wins in the Winter Olympics is meager, focusing on speed skating. Of the six Chinese ski medals won, both in the freestyle style category, there is one gold medal.

China currently has about 200 ski resorts. The country’s official aims to increase that number by five times by 2030. With an average after-tax income in China in 2016 of $ 3,619, more and more people buy cars to go skiing. They no longer consider skiing an expensive and dangerous sport.

The average cost for a day out in a park in Harbin that includes equipment rental is $ 74. Guests often choose the service package of 45 USD for 3 hours of entertainment.